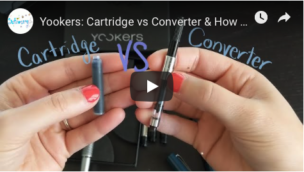 Cartridge vs Converter : How to use it.

how to fill a felt-tip pen

The parts of your felt-tip pen

Your felt-tip pen consists of four parts when assembled—the cap, the tip, the barrel, and the ink reservoir. Most reservoirs are either a piston converter or a cartridge . The converter requires fountain pen bottled ink. The cartridge is a self-contained, disposable unit filled with ink. Removing the barrel. First remove the cap. Then remove the barrel by turning it counterclockwise.

1. Filling with a fountain pen converter

Remove the piston converter by gently pulling it away from the tip. Insert a fountain pen cartridge into the tip and push firmly until the cartridge seats itself. You will hear a small click. You can easily switch between bottled ink and cartridges by rinsing the nib and piston converter with cool water periodically.